The Logic Behind Events In Ethiopia – OpEd (urasiareview.com)

A girl stands outside her home in the Tigray Region, Ethiopia. Credit: UNICEF/Tanya Bindra
May 16, 2021  Peter W. Esmonde*  0 Comments

On July 22, 2020 The Minority Rights Group published a press release on ethnic cleansing of minorities in Ethiopia. On October 25, I made a note that there had been almost daily ghastly attacks in the west of Ethiopia over recent months. In some places people were saying they were just waiting to be slaughtered; they felt utterly insecure. By October I had long despaired at the lack of international protest and awareness. In this article I attempt to unearth the flow of logic that lies beneath the surface.

Washington, DC (CNN)The US has condemned Eritrea and Ethiopia for coordinating their troops to close off a key aid route to Ethiopia’s war-torn Tigray region, following an exclusive CNN investigation published earlier this week that found that Eritrean soldiers were blocking critical humanitarian aid to starving and wounded civilians.

The United States is gravely concerned by the increasing number of confirmed cases of military forces blocking humanitarian access to parts of the Tigray region. This unacceptable behavior places the 5.2 million people in the region in immediate need of humanitarian assistance at even greater risk.

Massacres, rapes and starvation: Breaking through the blackout to expose Tigray’s ‘crimes against humanity (The Telegraph)

Amhara region militiamen ride on a truck as they head to face the Tigray People’s Liberation Front near the border of Ethiopia’s semi-autonomous region of Tigray Nov. 9, 2020. An Ethiopian Catholic priest says atrocities are still occurring in Tigray. (Credit: Tiksa Negeri/Reuters via CNS.)

NAIROBI, Kenya — A priest from the Catholic Eparchy of Adigrat in Ethiopia’s northern region of Tigray says killings, abductions and rape are still occurring in the region where a military offensive launched in November. 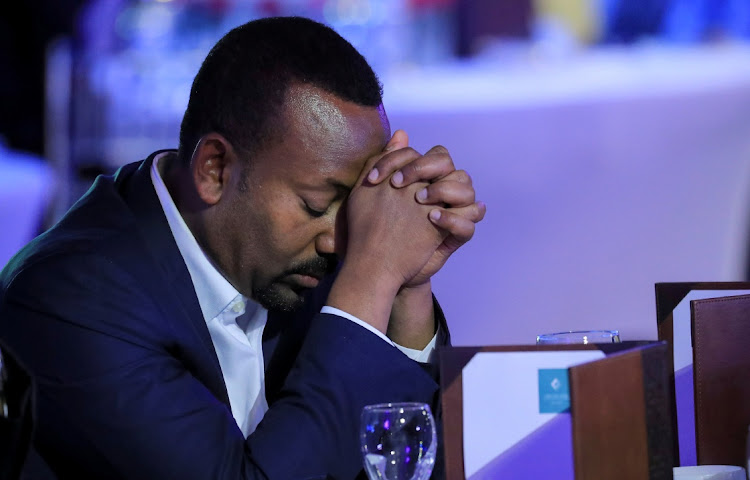 The United States is deeply concerned about increasing political and ethnic polarization throughout Ethiopia, the U.S. State Department said on Friday, adding that Washington will work with allies to secure a ceasefire in the Tigray region, provide assistance and hold human rights abusers accountable.

Six months into the conflict in Ethiopia’s northern Tigray region, the specter of widespread hunger and starvation looms, as continued military operations and violence stall aid delivery and threaten the approaching planting season, according to the United Nations and several other observers.

The National News: US envoy calls for ‘immediate withdrawal’ of Eritrean forces from Tigray

US envoy calls for ‘immediate withdrawal’ of Eritrean forces from Tigray

In a week-long trip to Ethiopia, Eritrea, Sudan and Egypt that concluded on Wednesday, Mr Feltman relayed directly to Eritrean President Isaias Afwerki the need to remove his troops from Tigray.

Rape is being used as a weapon of war in Ethiopia, say witnesses (The Guardian)

Rape is being used as a weapon of war in Ethiopia, say witnesses

Tracy McVeigh
Fri 14 May 2021 01.00 EDT
Thousands of women and girls are being targeted by the deliberate tactic of using rape as a weapon in the civil war that has erupted in Ethiopia, according to eyewitnesses.

In a rare account from inside the heavily isolated region of Tigray, where communications with the outside world are being deliberately cut off, an Ethiopian nun has spoken of the widespread horror she and her colleagues are seeing on a daily basis since a savage war erupted six months ago.

“Rape is starting at the age of 8 and to the age of 72. Many, many have been raped. This has all happened so quickly,” said the sister, who cannot be named to protect her security but is based in the regional capital of Mekelle.

(CNN) The top Republican on the House Foreign Affairs Committee is calling on the Biden administration to enact sanctions in response to the ongoing human rights abuses in the Tigray region of Ethiopia after a CNN investigation found that Eritrean soldiers were blocking critical humanitarian aid to starving and wounded civilians.

The Irob minority group in Ethiopia is facing an existential crisis in addition to the mass atrocities inflicted by the ongoing conflict in the Tigray state.

Ethiopian Prime Minister Abiy Ahmed launched military forces in response to “traitorous” attacks on military camps that has since escalated to thousands of civilian casualties, hundreds of thousands of people who have been internally displaced within Tigray, and 63,000 refugees who have fled to Sudan since fighting broke out on November 4th, 2020.

The embattled region the Irob occupy “has been turned totally upside down,” Teklay, resident in the capital Addis Abab, told Al Jazeera.

“Many, perhaps up to 50 per cent of the original population…fled to regional cities in Tigray and even to Addis Ababa, leaving mostly elderly and children behind” he added.

The New York Times report: As Ethiopia Fights in Tigray Region, a Crackdown on Journalists

NAIROBI, Kenya — One Ethiopian journalist was taken away by police officers as his distraught 10-year-old daughter clung to him. Another fled the country after she said armed men ransacked her home and threatened to kill her.

This week Ethiopia’s attorney general’s office released its findings into allegations of atrocities committed by Ethiopian and Eritrean forces in Tigray’s historic city of Axum in late November 2020. The press release stated that most of those killed were fighters who died in clashes with Eritrean troops, and not civilians.

SJTE Letter to the President of the UN Security Council

Let the world know what is happening in Tigray against innocent civilians by Ethiopian and Eritrean forces!

We want the world to know the genocide and atrocities that are taking place in the Tigray region of Ethiopia against innocent civilians by the ruthless and godless Ethiopian and Eritrean forces! The above graphic photos are a tiny example of the mass massacres recurring almost daily in the whole Tigray! The international community are asked to speak out and condemn such kind brutal ethnic cleansing against Tigrayans by Abiy Ahmed of Ethiopia and Isaias Afeworki of Eritrea for mere of their ethnicity and racial prejudice!!!

The US Congress is pressuring the Biden administration to place sanctions on human rights abusers in Ethiopia’s Tigray region, pointing to the continued failure of Ethiopian and Eritrean forces to withdraw from the region.

“We understand that the Biden administration is reviewing all options, but nothing has been announced or finalised, which is why we are pushing them on this,” a congressional aide told The National on Wednesday. “It has been over six months since the conflict started.”

Photos of Tigrayans’ Protest in Berlin, Germany, Against Genocide in Tigray (Tesfay #TigrayWillPrevail)

No matter how expensive is the cost and the time too take us, we shouldn’t STOP from fight the good fight , until our people be freed from the invading forces of 🇪🇹& 🇪🇷 and restore our elected government of #Tigray! #TigrayElectedTPLF #TigrayWillPrevail https://t.co/XP76PLcWCu

Issued on: 11/05/2021 – 23:19 Modified: 11/05/2021 – 23:22
By:Georja Calvin-SmithFollow|Laura DI BIASIO
A deliberate “campaign” to prevent farming is unfolding in Ethiopia’s war-hit Tigray region, a top regional official has said, warning that the result will be “starvation.” Also, with Islamist extremism beginning to expand south beyond the Sahel, we visit an anti-terror academy which has been built in Ivory Coast. And finally, women in the fishing industry have been hit hard by the pandemic: we bring you a report from Senegal.